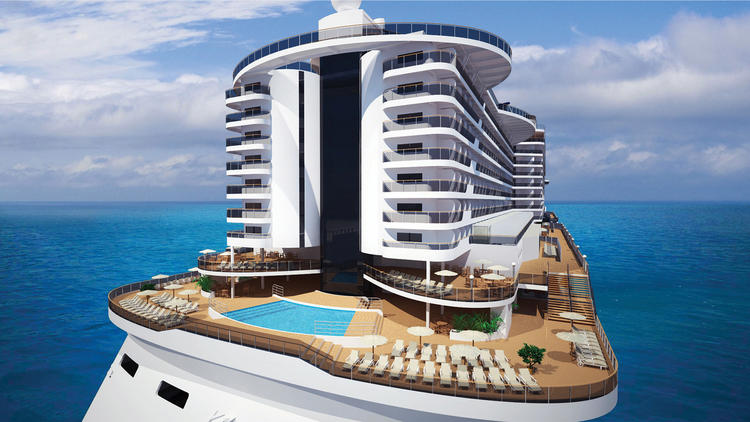 Construction on MSC Cruises' next ship bound for the U.S. market kicked off Monday with the cutting of the first steel of the new vessel at the Fincantieri shipyard in Monfalcone, Italy.
The new MSC Seaside ship will be able to accommodate up to 4,140 passengers in double-occupancy cabins, and is scheduled to arrive in Miami in December 2017 for year-round cruises to the Caribbean. 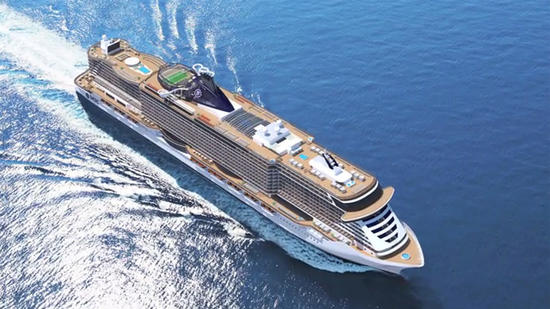 "Today, we have witnessed the beginning of the work on an extraordinary new ship, MSC Seaside. It is a ship that revolutionizes industry standards, with an audacious and innovative design that brings guests and sea closer," MSC Cruises' Executive Chairman Pierfrancesco Vago said in a news release.
MSC Seaside will sport features such as a 360-degree seafront promenade that circumnavigates the sides of the vessel with outdoor spaces, shops and restaurants, MSC said. It will also offer "the most interactive and originally-designed" aqua park at sea with five water slides and attractions, the cruise operator said.

"It's a sunny ship — summer ship," noted MSC CEO Gianni Onorato, in a phone interview, adding the ship's name and seafront design illustrates the company's vision for cruising in warm weather locations and the proximity with the sea.
The new ship will also enable MSC to offer travelers a wider variety of itineraries and to more islands in the Caribbean. "The idea was to create a different ship, a ship that follows the sun," he said.
Operator MSC Cruises also plans to officially name the 154,000-gross-ton ship at PortMiami in a formal ceremony following its arrival – the first time the Mediterranean cruise operator will christen a ship in the U.S.
In Miami, MSC Seaside will join another company ship, MSC Divina, which will relaunch year-round sailings to the Caribbean in November this year. Both ships will operate from a newly-renovated and expanded terminal and dedicated berth at the Miami seaport, the cruise line said.
MSC sailed from North America in late fall and winter for nearly a decade before MSC Divina was deployed to Miami for year-round Caribbean sailings in November 2013. The ship was returned to the Mediterranean this summer due to increased competition and pricing pressures, officials said.
Now MSC is plotting a bigger U.S. comeback with the two ships.
"It's a clear message of our serious intention with the North American market," said Onorato, noting the importance of the area for sourcing cruise passengers.
MSC Seaside represents a new class of ship for MSC, which is based in Geneva. The company's U.S. division is headquartered in Fort Lauderdale, but the cruise line does not currently sail from Port Everglades.
The new ship is part of a $5.8 billion, seven-ship investment plan to double its capacity by 2022, MSC officials said. A second Seaside-class ship is due to enter service in 2018.
Additionally, the new ship offers convertible staterooms that can accommodate up to 10 people as well as luxury suites with private Jacuzzis and hanging gardens. MSC Seaside will also have an enhanced MSC Yacht Club with private solarium, lounge and pool. Among the ship's public spaces will be a two-deck glass-walled atrium and theatre for entertainment.
MSC Seaside will be equipped with a number of eco-friendly features such as advanced water treatment systems to remove pollutants and hazardous substances from wastewater; garbage treatment plants for efficient solid waste management and scrubbers to reduce emissions.
In 2014, MSC carried 1.67 million cruise passengers. It's projecting 10 percent growth in 2015.
In another annoucement Monday, MSC said it has opened sales of cruises aboard its new 4,500-passenger MSC Meraviglia ship to members of its loyalty program MSC Club. Reservations will open to the general public on July 5. The new ship is set to debut in the Mediterranean in summer 2017.